One week on from Max getting glasses and he has totally surprised us and loves them! Well “love” might be a strong word and he certainly doesn’t “love” putting them on but he’s definitely appreciating a whole new world since he can see more clearly and even cried last night when daddy took them off him for bed!

To be fair if you haven’t been able to see up close since you were born, it’s probably a revelation to see the world more clearly. With his new eyes on the world Max is taking in people’s expressions, looking at books and even trying a few makaton signs!

Being able to see more clearly has given Max a further zest for life and chaos! The latter was demonstrated yesterday when he was able to work out how to take off his nappy which contained a rather nasty present for mummy. He thoughtfully left this for mummy to find in the middle of the living room and crawled off, with a rather naked and dirty bottom 🤦‍♀️😂 Good job Daddy has a carpet machine.

The day has come that Mummy and Daddy has been dreading, Max got glasses! To be fair we’ve known for a while that he was long sighted (He can’t see very well close to him, but no problem watching the tv!) and he’s been having check ups to see how his sight would progress.

At the last check up, despite Max’s best efforts not to comply with the eye test (which two year old does?) the optician found his eye sight hasn’t got any better and decided Max needed glasses ASAP.

Off we toddled to see Richard the Dispensing Man who told Mummy, Max qualifies for Tomato glasses. These glasses are made designed especially for people with an extra chromosome and have the bonus feature of being indestructible. This is a very important point as Max is likely to be very rough with them…. any guesses how long it will take until they are thrown down the toilet?!

Mummy spent a long time choose some very nice frames with cars on them in the hope that Max will like them. This is a bit ironic as Max probably can’t see the cars on the glasses unless he’s wearing his glasses, which means he’s unlikely to ever see the blooming cars!

We’ve been told to ease Max into wearing them. So fair he has whinged/ sounded like he is being murdered when they are put on, but then seems happy with them until he remembers he’s wearing them! For example silly mummy did just that taking this selfie and as soon as he saw himself with them, they were thrown across the table! So based on Max’s encounters with hearing aids and his reaction so far, it’s going to be a bumpy ride 🤣

In the meantime when he does wear him, we think he looks rather cute. What do you think? 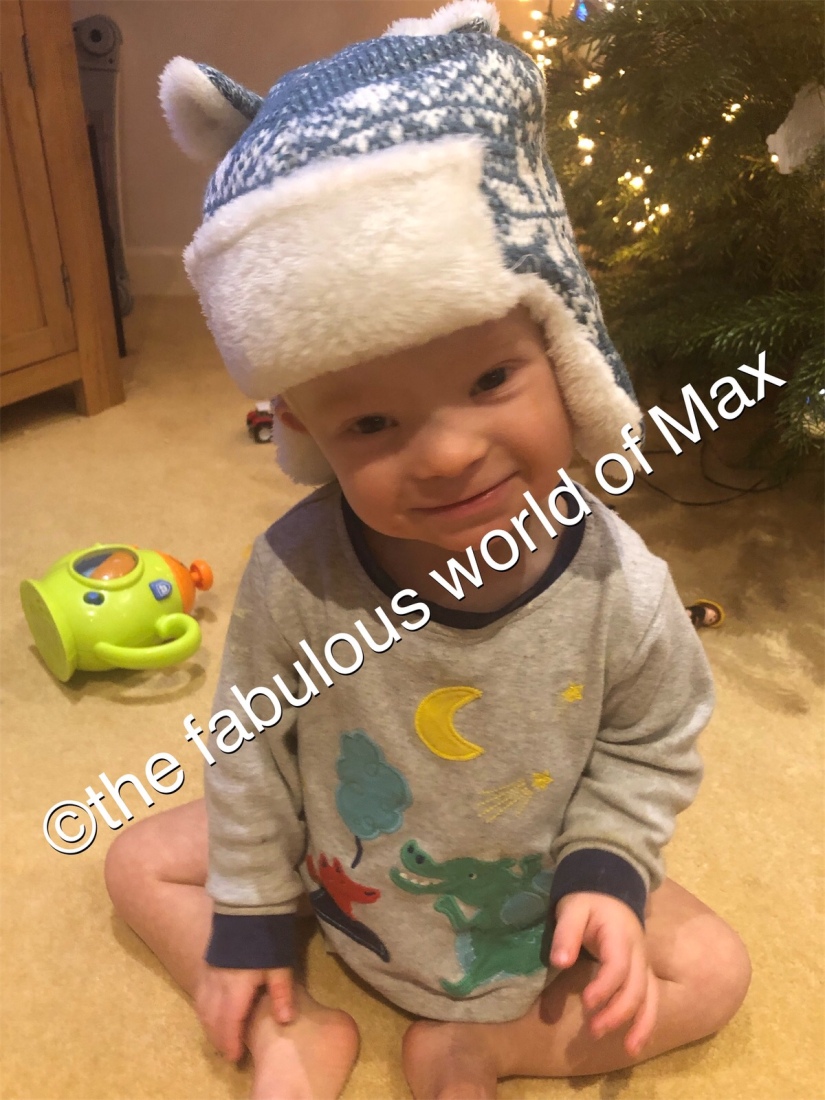 In the lead upto Christmas Max became an escape artist whilst out shopping for his daddy’s present, which is the reason the story can only be told now!

Whilst in a local branch of Ernest Jones, like any two year old Max became restless at being stuck in the buggy, so his mummy decided to let him out so he could explore the shop. As it was early the shop was empty, Max happily crawled around looking at the different cabinets.

Mummy at this point turned her back briefly to enter her card details, just at the moment Max reached the door of the shop (the opposite end to where Mummy was). Max was excited to see the automatic doors open and decided to crawl through them into shopping centre outside!

At this point the shop assistant told Max’s mummy he had escaped and in the 30 seconds it took his mummy to run down the shop to retrieve Max, he had already made friends with a surprised elderly lady, who was baffled where Max had appeared from! Needless to say Max and mummy made a swift exist despite Max’s protests he wanted to explore some more!

Well Max’s first Christmas he’s been aware of has passed uneventful- which his mummy and daddy can now breath a sigh of relief, as for the last two years he’s either been in nicu after being born 4 days earlier and then deciding to go on hunger strike, or last year he was in the early stages of rhino virus and the infamous super snot which left him in hospital for 5 days on oxygen.

So this year we were determined to have a few days of fun, which Max certainly did! First he visited Father Christmas at Legoland, which for any parent of a two year old you never knows how it’s going to go meeting the big man for the first time. Luckily Max wasn’t phased. Although he did get bored and crawled off at one point, before crawling back when he knew a present was about to be given!

He then spent the last two days at different family members houses being throughly spoilt with lots of gifts, including lots of cars! Max is already car mad and will pick playing with a car over anything else. So you can imagine he was very excited to receive a toy garage and has spent a lot of time making car noises, wheezing cars at and down the ramp.

He also likes visiting other people’s houses as there are lots of rooms to explore and mischief to get upto! So no mummy and daddy didn’t really get to relax for one moment. 😂 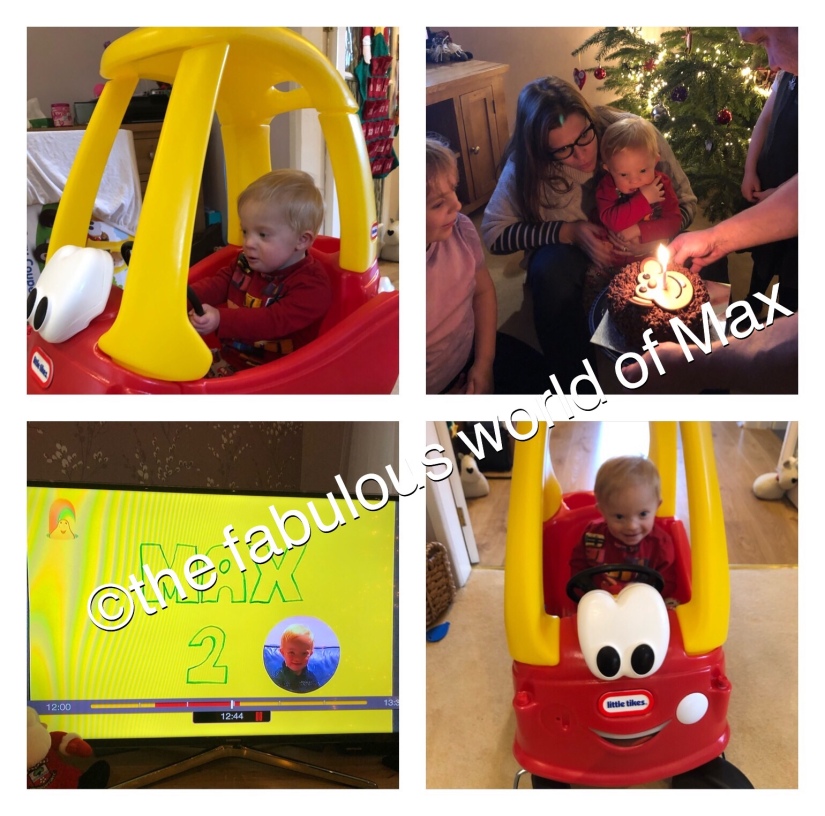 Happy birthday Max, two today! Max being Max, arrived 5 weeks early, we reckon because he was bored waiting to be born and didn’t want to miss out on Christmas!

Since his dramatic and early arrival, life has never been dull and certainly not quiet. Today was no exception, with Max loving the attention he was given, even if he didn’t totally get what a birthday is! He especially liked his Little Tikes car he got, which he loves sitting in and demanding to be pushed around in (why push yourself when someone else will! 😂) He was lucky enough to have a birthday message read out on CBeebies by his favourite presenter Ryan and had a tea party in his honour with his family. And of course he had a monkey cake!

Meet Tizzy the cat. The first baby in the Taylor household, who arrived much earlier than our two legged small people.

Tizzy wasn’t impressed when Max’s big sister arrived and sulked for a long time. So when Max arrived we were surprised she was instantly different, sitting by his cot watching over him when he first came home from hospital.

The love is definitely a two way process, as Max adores Tizzy and gets excited when she appears. Unfortunately this has often meant he’s then decided to give her one of his trademark bear hugs or worse grabbing and holding onto her tail!

We’ve been working with Max in how to be gentle with Tizzy and stroking is the best way to show her how much he likes her. Think we’re finally making progress, with this photo taken earlier this week, when Max actually stood by Tizzy and didn’t grab her- not sure Tizzy is convinced it’s going to last!

Max was lucky enough to be invited to a Christmas party earlier this week with his Daddy, where he got to meet the Lord Major Of Portsmouth.

Max being Max wasn’t overall happy about the encounter as it meant he was dragged away from the toys he was playing with. He insisted on keeping an eye on them whilst he was having his photo taken! 🤣

The fabulous world of Max
Blog at WordPress.com.